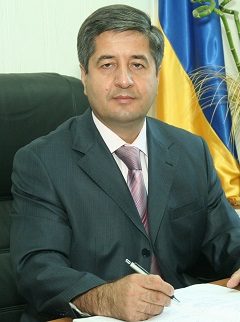 After graduating of Kharkiv Institute of Radio Electronics (KhIRE) in 1985worked as an engineer of the computing center, and later as the trainee-researcher of the Department of Technology of Production of Radio Equipment in KhIRE.

In 1991he completed the postgraduate studies and defended his thesis in the field of fiber-optic transmission systems.

In 2003 he defended his doctoral thesis on “Development of the Theory and Practice of Design of Electrodynamic Devices with Distributed and Quasiexperimental Nonlinear Elements”.

From September 2004 he is the academician of the Academy of Sciences of Applied Radio Electronics.

From 2003 to 2009 – Professor, Department of Technology and Automation of Radio Electronic Means.

According to the decision of the State attestation Commission in 2009, he was awarded the academic title of Professor.

From 2009 M. A. Omarov was the Dean of preparatory faculty for training of foreign citizens, head of the Department of Natural Sciences, and since 2012 worked as the Dean of the Training Faculty for Foreign Citizens, Kharkiv National University of Radio Electronics.

Since August 2015 workes as a Pro-Rector for International Cooperation

Since 2011, M. A. Omarov is a member of the Advisory Council on the preparing of foreign citizens and citizens of Ukraine for entry into higher education institutions with the State Accreditation Commission of Ukraine, since January 2013 – member of the Specialized Council for doctoral theses (speciality 05.12.02 – telecommunication systems).

Made a significant contribution to the development of information-measuring electronic systems and networks which are widely used in various sectors of the economy.

From 1990 to 1998 was a member of the Board of Kharkiv Regional Society of Azerbaijani culture “Khatai”.

Since 2000 – member of the Board of Kharkov regional society of Azerbaijani-Ukrainian friendship “Dostlug”, and in 2001 he was elected the Chairman of this society. Under his leadership, the society “Dostlug” successfully implemented a number of social, cultural, educational and charitable projects.

From 2002 to 2006 was the Deputy of  the  IVth convocation of the Kiev district Council of Kharkiv, the Chairman of the permanent parliamentary Commission on economic development and entrepreneurship.

For personal contribution to the socio-economic development of Ukraine by the decision of the Council of experts of international image program “Leaders of XXI century” awarded the diploma and medal “businessman of Ukraine”.

In 2006 became a laureate of the Executive Committee of the Kharkiv City Council in the category “Strengthening if international peace and harmony”.

In 2006 and in 2008 was awarded the Honorary diploma of the State Committee of Ukraine for Nationalities and Religions for strengthening of interethnic peace and accord in Ukraine.

In 2009 for the long-term conscientious work, personal contribution to training of highly qualified specialists, fruitful scientific and pedagogical activity was awarded the Honorary diploma of the Ministry of Education and Science of Ukraine.

In 2011 he was awarded the Honorary diploma of Kharkiv Regional State Administration and Kharkiv Regional Council for significant contribution to training of highly qualified specialists, fruitful scientific and pedagogical activity and a high level of professional skills.

In 2011 by the order of the President of Azerbaijan he was awarded the state insignia of the Azerbaijan Republic – the medal “Tereggi” for the merits in the field of friendship among peoples and for the developing of Azerbaijani Diaspora.

In 2012 “For the outstanding achievements in science and technology” by the decision of the Presidium of the Academy of Sciences of Applied Radio Electronics was awarded with the medal “20 years of the AS ARE”.

In 2013 he was awarded with the diploma of the Supreme Council of Ukraine “For the significant personal contribution to the development of science and technology, training of highly qualified specialists, long-term conscientious work and high professionalism”.

Awards and Prizes – In 2016 he was awarded the title of Honored Science Worker of the Republic of Azerbaijan.

In 2018 received the Gratitude  from the Kharkiv City Mayor for his fruitful community work, active livelihood, support for the Azerbaijani Diaspora in Kharkiv, a significant contribution to the development and strengthening of interethnic friendly relations.

In 2018 received the Honorary Diploma from the Head of the Kharkiv Regional State Administration for his significant personal contribution to the implementation of social and educational projects aimed to the  development of cultural ties between Ukraine and Azerbaijan and active public position.

Author of over 100 scientific works, coauthor of 4 monographs and 2 textbooks with a vulture of MES of Ukraine, has 12 copyright certificates and patents of Ukraine for inventions