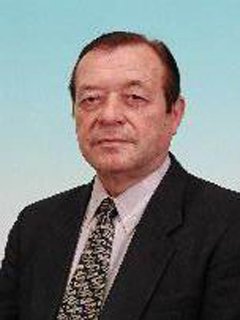 Professor of the Department of Computer Aided Design of Computers,Member of the specialized Scientific Council, Member of STC Presidium, Head of the Section 2 of STC, Doctor of Technical Sciences , Professor

Graduated from the Kharkiv Polytechnic Institute in 1964, specializing– „mathematical calculating and decoding devices” , was awarded the qualification of an electrical engineer.

Worked as an engineer of the SKB of automatic control systems (Kharkiv).

Since 1967 – postgraduate student, and since 1970 – lecturer of the Kharkov Institute of Radio Electronics).

1989 – received the scientific degree of the Doctor of Technical Sciences in the field of technical cybernetics.

In 1991 he received the academic title of professor. Department of Computer Science

From 1995 to 2003 he was in the position of Dean of the Faculty of Computer Engineering and Management. During the period of work the dean at the faculty opened seven specialties in the field of new information technologies in the following areas:

For the last ten years he has been a member of the Presidium of the Scientific and Methodological Commission of the Ministry of Education and Science of Ukraine on computer engineering, participated in the elaboration of basic normative documents of two-level education in Ukraine – standards of bachelors, specialists, masters in computer engineering

Prof. Krivulya G.F. is the founder of the scientific school for technical diagnostics and computer-aided design of computer engineering, and 22 candidates and 4 doctors of technical sciences have been trained under his guidance. Currently, he is the scientific director of several state-owned research programs.

Elected as a full member of the International Academy of Applied Radio Electronics (Russia, Ukraine, Belarus).

Member of the editorial board of four international scientific and technical journals (Kharkiv, Zaporozhye, Ternopil).

In 1996-2000 he was Member of the Expert Council of the VAC of Ukraine.For more than ten years, he has been a member of the Scientific and Methodological Ukraine Commission of the Ministry of Education and Science on computer engineering, participated in the basic regulatory documents of two-level education in Ukraine – standards of bachelors, specialists, masters in computer engineering.

The author of more than 250 publications, including 11 monographs, 22 inventor’s certificates.