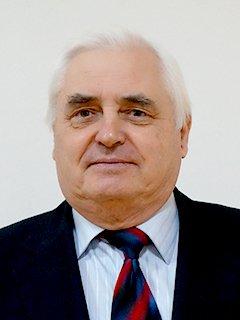 Head of the Department INE, Scientific Secretary of the Specialized Academic Council, Member of EMC, Member of STC, Doctor of Engineering, Professor

From 1975 to 1978 he studied at the post-graduate course of  the Kharkov Institute of Radio Electronics.  Since 1981 he began to work as an assistant.

In 2004 he defended his doctoral thesis on the specialty “Radio engineering and television systems”.

Since 2006 he has been working as a professor at the Department of Communication Networks.

Since 2009, after election to the competition, he works as the head of the department “Communication Networks”.

He is a member of organizing committees of two international conferences and member of the editorial boards of three scientific journals “Radio”, “Problems of Telecommunications”, “Electronics and Control.”

For many years he has been a scientist secretary of the specialized academic council for the protection of doctoral dissertations D64.052.03.

He is a full member of the Expert Council on the examination of dissertation papers of the Ministry of Education and Science of Ukraine in the field of electrical engineering, energy, electronics and radio engineering.

Since 2017 he is a member of the scientific and methodological subcommittee of the Scientific-methodical council of the Ministry of Education and Science of Ukraine in specialty 172 “Telecommunications and Radio Engineering”.

2011 – at the invitation of the Vietnam Academy of Sciences, gave a series of lectures to the staff of the Institute of Space Technology (Hanoi, Vietnam).

Since 2016 is the coordinator of the international mobility program “Erasmus +”.

The winner of the KNURE 2011 contest “Best in the specialty” in the nomination “Teacher-lecturer”.

He has more than 200 printed works, among them 5 monographs and 9 textbooks.