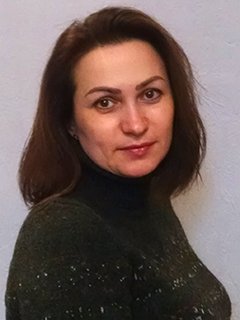 1998-2001 – studied at the postgraduate course of KNURE, Department of Microelectronics, Electronic Devices and Appliances (MEDA) (from 1999 – Department of Physical Fundamentals of Electronic Engineering (PFEE));

From 2001 – junior research assistant of the Department of PFEE;

From 2003 – assistant of the Department of PFEE;

From 2008 – Associate Professor of the Department of PFEE;

From 2017 – Leading Researcher, Department of Photonics and Laser Engineering (PLI).

Since 1998, within the framework of state budget research, she participated in research projects: “Prospects for the use of electromagnetic radiation of the millimeter range in accelerator technology”, “Development of energy-efficient and environmentally friendly technologies and technical means of using of the electromagnetic energy in the industrial and agro-industrial complex”, “Investigation of the physical processes of the generation, amplification and transformation of the electromagnetic radiation in quantum (lasers), optoelectronic and electronic devices, as well as the concept formulation of their application in radio electronic systems and communication and information technologies”, “Development of innovative energy-saving lighting technologies”, “The concept of development of resonant pulse compression and tools for obtaining powerful ultrashort microwave pulses in X, KU and millimeter ranges”.

to develop 2D and 3D mathematical and computer models for the study of physical processes in vacuum devices and plasma, the design of new high-performance devices based on microwave devices, such as microwave discharge lamps.

In 2012 received grants for traineeship in the Light Technology Institute (LTI), Karlsruhe (Germany).

In 2012 received grants for traineeship in the Light Technology Institute (LTI), Karlsruhe (Germany).

I have useful model patents 5 and patent for an invention.