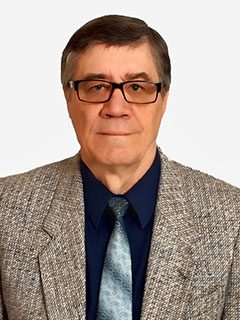 Professor of the Department of Computer Radio Engineering and Technical Information Security Systems, Doctor of Physical and Mathematical Sciences, Professor

Doctor of Sciences – 2005. Thesis defended June 26, 2005 in Kharkiv National University of Radio Electronics. Specialty 01.04.03 – Radio Physics. The subject of thesis – A Theory of Radiating Systems with Joule and Polarization Losses.

Professor of the department of Fundamental Radio Engineering (FRE) since 2007.

The main stages of pedagogical activity:

Since 1992 – Doctoral student of TEA department.

Since 2006 – Professor of FRE department (KhNURE).

He took part in the performance of scientific works on special subjects as a performer and a responsible performer.

Has over 130 scientific publications, including a monograph, has 3 inventor’s certificates of Ukraine