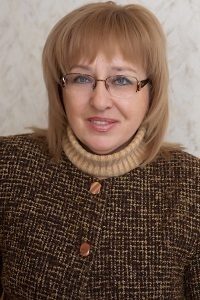 In 1974 she graduated from  Kharkov Institute of Radio Electronics speciality “Applied Mathematics”.

1993 – got an academic title of Senior Reseacher specializing in “Information Systems and Processes”.

She has coordinated the project IT/534 – 2009 “Development and implementation of the distributed architecture of the MESU ontology portal for reliable, secure and efficient management and integration of Ukrainian education resources” (within the framework of the State Program “Information and communication technologies in education and science” for 2006-2010, project ICT 2009-2010).

She has participated in the international project «Towards Trust in Quality Assurance Systems» (TRUST), 516935-TEMPUS- 1-2011- 1-FITEMPUS- SMGR (2011/2014) within the national priority “Ensuring the Quality of Education”; has taken part in the trainings in the framework of the international scientific practical seminar, devoted to studying the experience of Slovakia Universities in creating quality assurance systems (March, 2012, Košice, Slovakia). She has also participated in the international project «Towards Transparent Ontology-Based Accreditation», TEMPUS SM_T020B06-2006 (UA) (2007/2008) within the national priority “New Information Technology to Ensure Transparency of Accreditation of Universities”; as well as in the international scientific practical seminar on dissemination of project results (May 16-20, 2008, Kyiv, MESU).

Chair of “Social Communication on the Basis of Intelligent Information Technologies” Section in subject sector “Information Support of Sustained Social Economical Development of Society”, VI international scientific conference “Science and Social Society Problems: Informatization and Information Technologies”.
Co-chair of “Modern Problems of Computational and Artificial Intelligence” section at the conference “Intellectual Information Systems” in the framework of the annual International Youth Forum “Radio Electronics and Youth in XXI Century”.
Member of a working group of the scientific committee on “Computer Science” at the MESYS, member of a development committee for educational standards of Bachelors 06.010104 – “Computer Science” (2010), and Masters of Science 08.010104 “Artificial Intelligence Systems” (2011-2012). Coordinator from KhNURE side of the International Project with ITIN University (Technical University on IT, Networks and Information Systems, Cergy-Paris, France), aimed at implementation of modern technologies of computer education and commercialization of intelligent systems.

Certificate from the Main Administration of Education and Science of Kharkiv Region Public Administration for long standing productive scientific and educational work and to Day of Science, 2012;
Certificate from the Head of Kharkiv Region Public Administration for weighty contribution into science and education development, training high-skilled professionals, and to 80th anniversary of Kharkiv National University of Radio Electronics, 2011;
Certificates of honor, commendations, valuable rewards of KhNURE for high results achieved in science and education (1996-2012), including best student diploma supervisor (2007), for best results in arrangement of section panels at the International Forum “Radio Electronics and Youth in 21st century” (2009-2012);
For best results in arrangement of Inter-regional career fair “Young Expert in 21st century” (2008-2011).

Has over 120 publications, including  tutorial  and monograph.