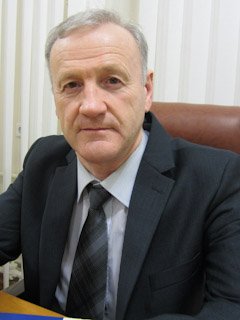 In 1979 he graduated from the Kharkiv Institute of Radio Electronics, Specialty “Automated control systems”.

The main stages of scientific and pedagogical activity:

2003 to present – Professor the Department of System Engineering in Kharkiv National University of Radio Electronics.

From 1996 to 2015 he was a scientific secretary, from 2015 – chairman of the specialized scientific council D 64.052.02 on defending doctoral and candidate dissertations at the Kharkov National University of Radio Electronics.

Since 2013 – Member of the specialized scientific council D 41.052.08 at Odessa National Polytechnic University.

Member of the Presidium of the Scientific and Technical Council of KhNURE.

Member of the editorial boards of scientific journals “The current state of scientific research and technology in industry”, “Applied aspects of information technology”.

Member of the organizing committee of the International scientific and technical conference of students, graduate students and young scientists “Computer Science, Information Technology and Management Systems”.

Academician of the International Academy of Sciences of Applied Radio Electronics.

Member of the Ukrainian Scientific and Educational IT Society – PO “USE IT”.

Diploma of the Ministry of Education of Ukraine (2001).

Winner diploma of the contest “KNURE – the best in their specialty” in the nomination “Teacher” (2002).

Certificate of honor of Kharkov National University of Radio Electronics (2013).

Gold medal of the Academy of Sciences of Applied Radio Electronics (2017).

Diploma of the Department of Science and Education of the Kharkiv Regional State Administration (2017).

Gratitude of the Chairman of the Kharkiv Regional State Administration (2017).

A nominal scholarship and a diploma by Kharkiv Regional State Administration in the nomination “Informatics and computer science” – a scholarship named after Sviridov V.V. for outstanding scientists (2018).

Has over 250 publications, including 3 monographs.