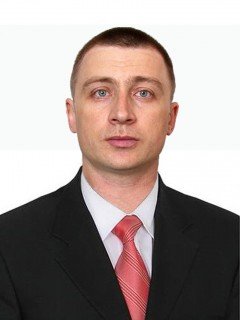 1998 – graduated  from the Kharkiv Institute of AF Pilots

1999 – Candidate of Technical Sciences in specialty 20.02.14 “Arms and Military Equipment”. (defended the dissertation at the KhIAFP).

1999 – lecturer of the military use of the AFU by aviation.

2004 – Associate Professor of the Department of Military Use of AFU by aviation.

2009 – Professor of the Department of Telecommunication Systems KNURE.

Member of the Organizing Committee of:

Participant in the Tempus International Project No. 544455-TEMPUS-1-2013-1-SE-TEMPUS-JPCR “Preparing the Next Generation of Cybersecurity Experts: A New, Recognized EU Master’s Program” (ENGENSEC).

In 2003, for the achievements in the field of technical sciences, a nominal scholarship was awarded by the Kharkiv Regional State Administration named after Academician Georgy Proskury. In 2006 he became a winner of the contest “Higher School of the Kharkiv Region – the Best Names” in the nomination “Young Scientist”.

Has more than 270 scientific articles and reports, 1 international certificate in the field of cybersecurity. 18 patents for utility model.